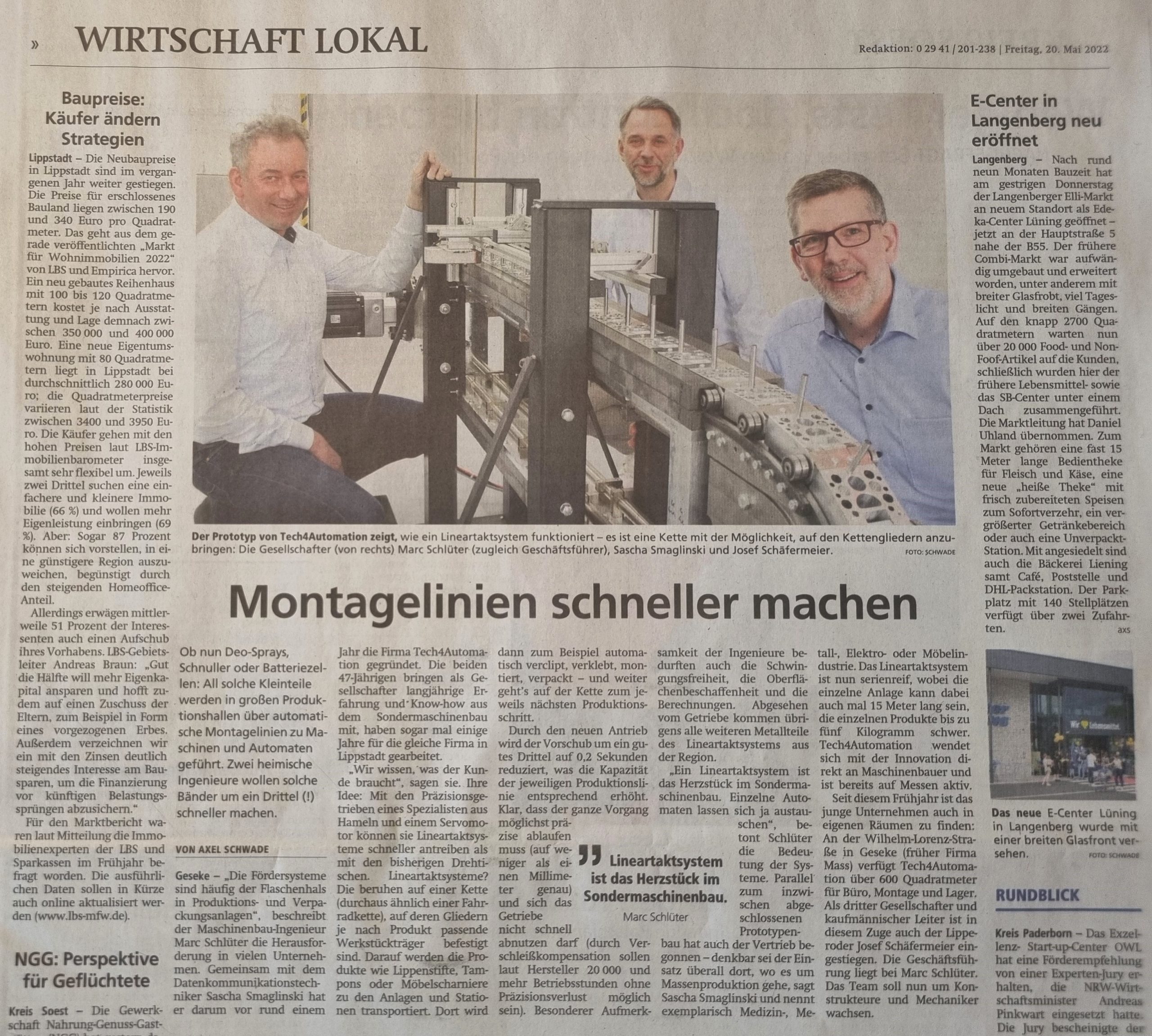 Whether deodorant sprays, pacifiers or battery cells: All such small parts are fed to machines and machines in large production halls via automatic assembly lines. Two local engineers want to make such tapes a third (!) faster.

By Axel Schwade (Editor of the daily newspaper)
Geseke – “The conveyor systems are often the bottleneck in production and packaging systems,” says mechanical engineer Marc Schlueter, describing the challenge in many companies. Together with the data communication technician Sascha Smaglinski, he founded the company Tech4Automation about a year ago. As shareholders, the two 47-year-olds have many years of experience and know-how in special machine construction and even worked for the same company in Lippstadt for a few years.

“We know what the customer needs,” they say. Their idea: With the precision gears from a specialist from Hameln and a servo motor, they can drive linear indexing systems faster than with the previous rotary tables. linear clock systems? They are based on a chain (quite similar to a bicycle chain), to the links of which suitable workpiece carriers are attached, depending on the product. Products such as lipsticks, tampons or furniture hinges are then transported to the systems and stations. There, for example, the parts are automatically clipped, glued, assembled, packaged – and the chain continues to the next production step.

The new drive reduces the feed rate by a good third to 0.2 seconds, which increases the capacity of the respective production line accordingly. It goes without saying that the whole process has to be as precise as possible (to an accuracy of less than a millimeter) and that the gearbox must not wear out quickly (according to the manufacturer, 20,000 and more operating hours should be possible without loss of precision through wear compensation). The engineers also paid particular attention to the freedom from vibration, the surface finish and the calculations. Incidentally, apart from the gearbox, all other metal parts of the linear transfer system come from the region.
“A linear indexing system is the heart of special machine construction. Individual machines can be exchanged,” Schlueter emphasizes the importance of the systems. In parallel with the prototype construction, which has meanwhile been completed, sales have also begun – use is conceivable wherever mass production is involved, says Sascha Smaglinski, naming the medical, metal, electrical or furniture industries as examples. The linear indexing system is now ready for series production, with the individual system sometimes being 15 meters long and the individual products weighing up to five kilograms.

Since this spring, the young company can also be found in its own premises: Tech4Automation has over 600 square meters for offices, assembly and storage on Wilhelm-Lorenz-Straße in Geseke (formerly the company Mass). Lipperoder Josef Schäfermeier also joined the company as the third shareholder and commercial director. Marc Schlueter is in charge of the management. The team is now to be expanded to include designers and mechanics.